Malifaux uses a lot of markers, and it's important to be able to tell what's what and who dropped things. So I decided that I'd take the opportunity to make something cool. 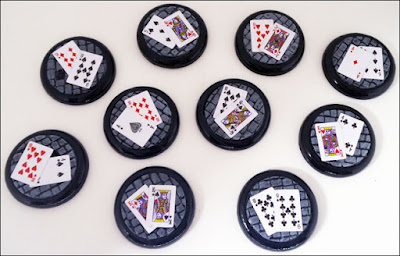 The Schemiest schemer I have is Colette, and she really loves dropping scheme markers, so I made ten. I like the idea of tiny cards marking things in a game where cards are a resource. The cards are 1:12 scale doll house cards that I bought from a Chinese seller through Ebay. 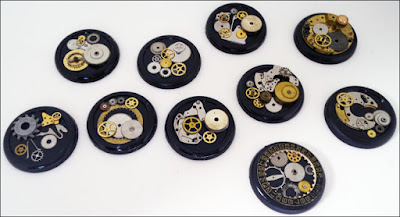 As I mentioned in my post about my Ramos crew, initially I was going to base all of my miniatures on watch parts like these. It's quite a lot of effort to cover up with a miniature, and I like how they look unpainted though so I figured it would be a great way to do my scrap markers. Initially I made five, but then I actually played Ramos summoning spiders against someone who insisted on blowing up every spider, and five just was not enough.
Posted by Helen at 04:52:00

Email ThisBlogThis!Share to TwitterShare to FacebookShare to Pinterest
Labels: Malifaux